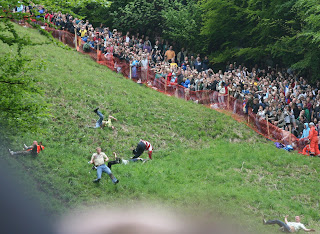 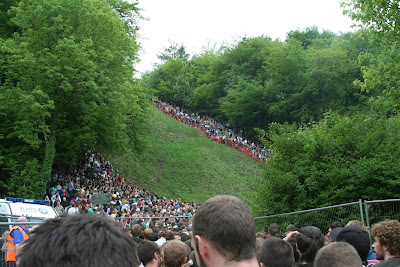 “It was never like this. This is mad. Absolutely mad.”

Capt. Sensible shrugged and frowned. He hates crowds. So do I, usually.

“It's unbelieveable.” said the son no 2's girlfriend.

We were among several thousand people gathered at Cooper's Hill near Brockworth, Gloucestershire for the annual traditional blood sport of cheese rolling. An eight pound Double Gloucester cheese is sent rolling and bouncing wildly down the slope, which varies between 1-1 to 1 in 3. People are invited to run and bounce wildly after it. They always do. The first one down wins the cheese. Hurrah.

There are four races for the chaps and one for women. In between, there are uphill races for youngsters.

Moving to Gloucestershire from Wales as a child, it was an amazing spectacle. Where I came from, the only Whitsun event was the church parade which involved wearing a new dress, white ankle socks and new white kid-leather shoes. The only danger was that of one of the banner-bearers fainting and small children being asphyxiated under a ton of heavily embroidered material.

It's a bit odd taking children to an event where the contestants might well snap a thigh bone bloodily in front of their eyes or dislocate a shoulder or break a neck. But I suppose people used to take the nippers to bear-baiting and cock-fighting before television came along.

No-one really knows how it started or when. I like to think it was a Morris Men's picnic near the flagpole at the top that got a bit drunken and lairy. Someone nicked someone else's handkerchief and a quite-cross Morris man kicked the cheese course over the edge in a fit of pique causing several hungry Morris Men to attempt to rescue it.

Today the interest was unprecedented. The usual route to Brockworth was completely jammed – so congested that the police had to close a major road and display warning signs and diversions on the M5. Knowing the geography, our party took a little detour and walked the scenic route to Cooper's Hill from the local Roman villa.

The sight that greeted us was most definitely Roman seasoned with a few Mexican waves. We joined a cheering, jostling, baying crowd of several thousand people clustered closely at the top, sides and base of the famous hill. There was absolutely no chance of getting to the sweet spot at the side of the hill where I used to sit with friends; a spot where you really appreciate the speed at which people are tumbling, tripping and falling as they rush headlong after those cheeses.

The crowd thickened. Not that it wasn't quite thick already. Why, for instance, do people take the tiny and defenceless to such massively popular events? A woman with nose rings and tattoos pushed through with a startled-looking prem baby in a baby carrier, his nasal tubes still connected indicating a certain vulnerability. Another woman pushed by thrusting a lost, tear-stained little girl in front of her. A man carried a petrified Jack Russell puppy.

Soon it was nearly impossible to move. Interesting to observe people at close quarters. The smelly, the pissed, the only vaguely interested, the foreigners, the relentlessly loud but witty young Ozzies. I mentally checked those people nearby who I felt would, in emergency, walk on my head without a qualm. I was jostled quite violently by a St John Ambulanceman proving that even the angels of mercy are not without their mean streak. I felt, to be honest, a bit kettled - even in the absence of the Metropolitan Police.

The going was good. Yielding underfoot without being slippery. From the bottom of the hill we saw the cheeses and the competitors bouncing and tumbling and lurching and falling and looking dazed as the crowd cheered and applauded. We had a grandstand view of the St John Ambulance persons and the casualties.

The races are open to anyone who says they're over 18. There has never been drug-testing, in fact, it's the only sport where it's an unwritten rule to get rat-arsed before the race. Alcohol dissipates any unwelcome self-preservation instincts which might cause jarring of bones. It makes you bounce more softly. At least, that's what some have told me.

Suddenly someone yelled “NAKED MAN COMING THROUGH!” The crowd did a simultaneous “Eeeew” and parted like butter under a hot knife. He was indeed naked. He'd chased the cheese wearing only a jockstrap and now some wags had stolen his clothes. Some people just so ungrateful for entertainment.

The paramedics called 'Make way!” and stretchered an unlucky competitor through the crowd on a spinal board. A woman in front of me raised her camera above her head and snapped a picture; a photo of an injured person who she probably didn't know. Something to show the girls in the office.

It didn't feel much fun to be standing with ghouls hoping for a good shot of a snapped bone protruding or someone with a suspected C2 fracture.

We'd all had enough by then anyway. We'd done the traditional Bank Holiday thing of being in heavy traffic, standing in a massive crowd watching a Great British Tradition.

We had sometimes watched it through binoculars from my mother's back garden in Brockworth, sitting in deckchairs drinking iced lemonade. On reflection that was probably the most civilized way to do it.
Posted by Janh at 12:10 No comments: